COALTAR OF THE DEEPERS' last album, Yukari Telepath, was released in 2007. Their last single, DEAR FUTURE, was released in 2011. Their last concert was in 2015. I was ridiculously happy when I found out that they were doing another concert in April 2017. So I got to see COALTAR OF THE DEEPERS for the first time, during my honeymoon with my husband! Special thanks to one of my COTD FAN internet friends for helping me get the tickets through ePlus!

My husband and I got to hang out with some COTD FANs (from the forums and Facebook) the day before the concert. It was amazing to meet fans from Oregon, Canada, and Finland! I can't believe how quickly we became friends through COTD. 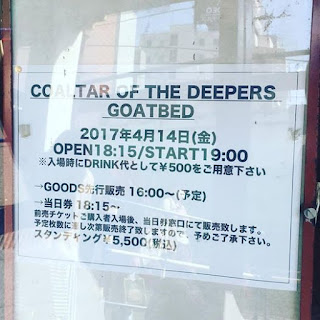 The day of the concert, my husband, friends, and I got to the venue a little early. While waiting, I got to see Akira (guitarist) walk by and some fans gave him gifts. A couple of COTD staff were selling new COTD shirts and I got to meet Kurata (manager), Kanno (drummer), and Koji (guitarist)! Not gonna lie, I was such a fan girl... I was surprised that Koji could speak English well! He also gave me a COTD shirt! Though there was mostly a language barrier when speaking with the others, thanks to Google Translate, we were able to talk about COTD FAN and how we came from all over the world just to see them! We got to take a photo with Koji and Kanno too! Special thanks to my husband for going back and forth to our AirBnb and to the venue to grab the gift I brought for COALTAR OF THE DEEPERS and NARASAKI! (We were in a hurry!) I made custom stickers and patches and got tequila as a belated birthday present for NARASAKI. I was able to give the gifts to one of the COTD staff members at the goods table.


GOATBED was the opener and they were pretty fun! I only heard about GOATBED from their My Bloody Valentine - Loomer cover on the Yellow Loveless compilation. They reminded me of the visual  kei/JRock I used to listen to when I was in middle school, so it felt a bit nostalgic. Shuji Ishii of GOATBED is also from cali≠gari (Kenjiro (bassist) is also from cali≠gari). GOATBED said that they invited COALTAR OF THE DEEPERS to do the concert with them. At the end of their performance, GOATBED shared an awesome cover of MY SPEEDY SARAH. Unfortunately, I cannot find a link to it anywhere at the moment. Maybe it will be up on iTunes some day.

How Smooth
When COTD walked onto the stage, it was like they returned to an old friend. They were such rock stars and everything seemed natural to them. When they opened with How Smooth, I was in awe and images from the "music video" in the FOREVER DVD kept flashing in my mind. I thought it was a great chill opening song to get the audience in the same vibe before we party like crazy.

Zoei
I pretty much headbanged through the hard parts and watched the fans wave their arms while NARASAKI sang.
(tezensu: waving both hands in the air in time to the music)
Throughout the concert, when the timing was right, I joined in with the arm waving and it was really fun haha.

Wipeout
Oh man... everyone went crazy during this song. I remember we were all jumping and I could feel the floor move.

Dear Future
It was a little more chill during this song. I also really wanted to sing along with the chorus, but mouthed the lyrics instead. Japanese fans don't really sing along so they can hear the band perform better.

Swimmers
Beautifully surreal. The blue stage lights waving onto the band really felt like they were submerged in water. I closed my eyes during this song a few times.

Dl++
THIS WAS A FUN TREAT. I didn't think they'd perform this song, BUT THEY DID!
NARASAKI's singing was very cute.

Receive
This was a fun shoegaze-y moment. I found myself mesmerized with the distortions and the transition to the end was beautiful.

Submerge
MORE JUMPING AND HEADBANGING!
I swear, everyone yelled, "ここに来るわ!!/koko ni kuru wa!!/It's coming over here?" in unison (Misato's quote from Evangelion) and it looked like NARASAKI expected it haha.

C/O/T/D
I lost my shit when this came on. It's such a classic. Koji was great with the guitar solo!

Aquarian Age
HOLD THE PHONE! THIS SONG IS FUCKING AMAZING LIVE.
IT SOUNDS BETTER THAN THE STUDIO VERSION. I DON'T KNOW HOW TO EXPLAIN THIS.
I didn't think I'd headbang and jump so much to this song.

Encore
The band talked to the audience a bit. A fan mentioned RABBIT EP and NARASAKI replied with something like, "Yeah! I know I know it will be out ....!" :(
When there was a lull, I couldn't help myself so I yelled out, "NACKIE, DEATH GROOOOOWL!!!!!"
He replied, "Nani?/What?"
Apparently, Japanese people call death growls, death voice... so he probably didn't understand what I was saying. oops.
...BUT THEN THEIR NEXT SONG WAS...

Dead by Dawn
THIS SONG IS ALSO AMAZING LIVE. NARASAKI'S DEATH VOCALS ARE SO MUCH MORE DIVERSE LIVE. He hit higher notes than usual and it sounded much better in my opinion.
There was lots of screaming. huhuhu...

Hyper Velocity
I also lost my shit when this song came on. I always dreamed to count along with the song... haha.
1! 2! 1! 2! 3! GO!
More jumping and headbanging.
It was beautiful.

Silver World
This was also a treat! I also didn't expect them to play this song! Again, NARASAKI was very cute.
It was going to be a sweet happy ending until...

Encore #2:
Killing An Arab (The Cure cover)
Morota played those famous trumpet notes from Killing An Arab. He looked sneaky while playing the notes as the band members walked off the stage. He repeatedly played the notes until KANNO came out waving his arms and making an X with his arms for "No!". In the end, KANNO gave up and the other band members slowly came out and NARASAKI looked like he was wondering what was going on.
The show ended with more jumping and headbanging.
It was as if we were all friends who had an amazing party together.
While everyone was saying goodbye, KANNO approached the audience and gave everyone high fives! His departure was quite dramatic as the spotlight shined on him. He bowed goodbye and disappeared behind the fancy curtains. 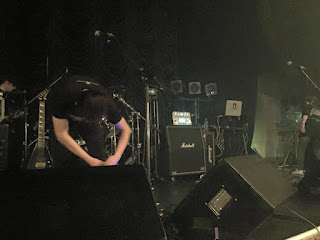 Even the end of the concert was really fun. As concert staff was putting the cables and instruments away, they would throw out the setlists to the fans. I tried to jump for them, but didn't catch them. One of the staff found KANNO's drumstick stuck in the curtain and threw that into the crowd too! I thought it was really nice of the lucky fans to let other fans take photos of the setlists!

When we got outside the venue, I got to meet some Instagram and Twitter COTD FANs that I have been following for a while! It was fun chatting with them about COTD.

Before we left, Kurata quickly approached me and gave me a folded piece of paper. I unfolded it and saw that it was a copy of the setlist! I thanked him a billion times and lost my shit. 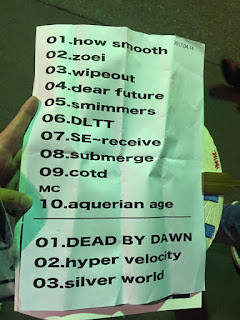 This whole experience was so surreal. COALTAR OF THE DEEPERS is my favorite band in the world and I'm so happy that I got to see them.